On my favourite food blog, Smitten Kitchen, blogger, chef, and humorist extraordinaire Deb does a quick look back at the recipes she's posted throughout the years at the end of her current post. For example, at the end of this week's recipe, "Banana Bread Crepe Cake with Buttterscotch" (I'm about ready to explode from sheer joy looking at the pictures of it), she tells her loyal, devoted fans and wannabe recipients of her creations that one year ago, she posted French Onion Soup and another recipe for Blackberry and Coconut Macaroon Tart; two years ago, it was New York Cheesecake, Shakshuka, and Easy Jam Tart; three years ago it was Chocolate Caramel Crack, Simple Potato Gratin, and Cinnamon Swirl Buns. I have to stop there because I haven't had breakfast yet, but I already know that whatever I have will pale dreadfully in comparison to what I'm fantasizing about for breakfast. I'm not trying to torture you too, but rather make a point. When April 15th rolls around, I do a similar look back, though not as delicious and savoury. April 15th is more like a bittersweet Thanksgiving dinner in my book.

To be honest, I was moody and out of sorts in the few days leading up to April 15th, but I didn't know why. Actually, when you're moody, do you really think about why you're moody? Or do you just brood? I mostly just brood. And then on the night of April 14th, it dawned on me while I was so blah. The realization came when Mylo brought up Véo out of nowhere. He asked what it would have been like to have Véo and Moxie, if Véo hadn't died. I said it would have been great--like another pair of Chloe&Mylo--but in reality, that's not how things would have been. I told Mylo that if Véo had lived, we probably wouldn't have had Moxie because my body takes an extra beating from having had cancer and going through a pregnancy afterwards. We were all dumbfounded by that realization.

It's hard not to think of how all our trials have a purpose and a path. And I do believe that there is Véo's spirit in Moxie. After all, Moxie was conceived the month that Véo would have been born, and now, Véo and Moxie's birthdays are exactly two weeks apart. How could you not believe in such a connection, such a cyclical wholeness? And perhaps that's why she's so spunky, this one--there's all that experience, challenge, and survival contained in that tiny body. So much energy!

Like I said, pregnancy took a toll on my body. In two weeks, I'm having surgery to repair the damage that giving birth Moxie has done: my lower left abdominal wall became weakened despite the Kevlar mesh, and I have a hernia above the mesh, above my bellybutton--both areas are painful, so it will be good to get that fixed. Also, my right breast has an excessive amount of scar tissue built up from the long-term, ongoing effects of radiation and is obstructing my saline implant, causing a lot of pain and immobility in my arm, shoulder, and neck. So my surgeon is opening me up there and removing all that scar tissue. After that and an estimated one-month recovery, I should be good as new, and maybe even better than that!

I used to be so scared every time I had to go under the knife, and I still deal with some fears, which are mostly based on past experiences with fear and surgery, but this time around, I am not as scared. I know that I have a beautiful family to wake up to. The only thing I really worry about is how I'm going to have to try not to laugh because laughing fucking hurts when you have abdominal surgery. Unfortunately, we have a house full of comedians. I guess there could be worse things in the world to anticipate dealing with. :) 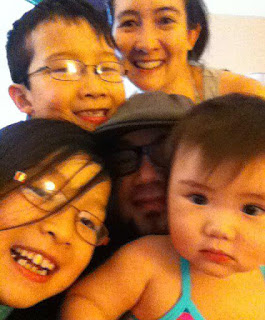 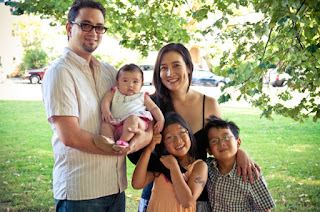 Posted by Cancerfuckingsucks.blogspot.com at 9:34 AM No comments: